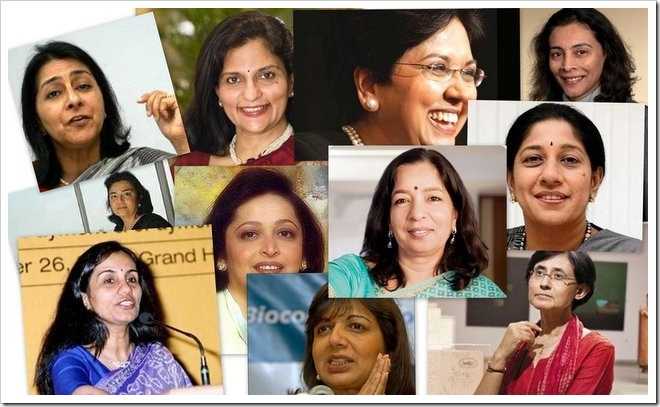 The Most Powerful Indian Women in Business

Gender equality has always been a dream for Indian society. Most of Indian women are still fighting against this discrimination on the basis of gender. Being women, they are always looked down upon. Situations are getting a bit better in cities, but in villages the situation is still not satisfactory.

We have recently celebrated International Women’s Day, on 8th March, 2017. On this day we celebrate the success and achievements of women in all the domains, such as, political, social, financial, etc. Women are now educated, well aware and mentally strong to deal with social obstacles. They are empowered now. Though they still have to go a long way and it is the responsibility of our patriarchal society to help them achieve complete and real empowerment.

Let us know celebrate the success stories of those women who have made it to be the most powerful women in Business.

1.    Chitra RamkrishnaShe is working as a MD & CEO for National Stock Exchange. She is a strong believer of women empowerment and she always believed that women are unique and much stronger than men.

2.    Aarthi SubramanianShe is working as Executive Director for TCS. She has successfully accomplished her most challenging project for Passport Seva portal and played a vital role in digitalization of this process.

3.    Alice G. VaidyanShe is renowned to take up new challenges of industries and make a successful outcome. She has lots of characteristics that took her on the top post at GIC Re (General Insurance Corporation of India). Alice G. Vaidyan is the first woman to get this top position at a public sector insurer in India.

5.    Arundhati BhattacharyaShe is the first woman Chairperson of State Bank of India and she has rolled out various digital initiatives to compete with private banks.Arundhati Bhattacharya spelt out some tactical goals such as improving risk management framework, taming asset quality deterioration, improving delivery standards, checking costs, improving non-interest income and many more.

6.    Ekta KapoorShe is Joint Managing Director, Balaji Telefilms and she is queen of TV soaps. She works hard to keep the things working in right manner. She is creator of various hit TV shows on Indian TV. She is burning her midnight oil for Alt Digital, (latest venture) to offer digital content for computers, mobiles, smart TVs and tablets.

7.    Nita AmbaniShe is the Chairperson of Reliance Foundation and Director of Reliance Industries. She handles the corporate social responsibility initiatives of Reliance industry.

8.    Priya NairShe is Executive Director, Hindustan Unilever and she can be icon for youth. She has started her career as management trainee in Hindustan Unilever in 1995 and got the position of executive director (Home care division) with her hard working and positive attitude towards the industry challenges. She led the entire detergent portfolio and helped increased market share in this industry. She has been delivering the goods for the company consistently.

9.    Rekha MenonShe is working as Chairman for Accenture India and managing 140,000 employees of this company. There were only 300 employees in India in 2000 but this scale has reached to 14000 with the hard work and efforts of this lady.

10.    Schauna Chauhan SalujaShe is working as CEO of Parle Agro and is responsible for its growth and progress in this highly competitive era. She is the eldest daughter of Mr. Prakash Chauhan (Founder of Parle Agro). She has to face competition from domestic food processing giants and international beverage giants. Her biggest achievement is construction of manufacturing plant in Uttarakhand.

Women in this era are much more empowered and liberated. But still there is a great way to go. We can only wish that our nation produces more women like these who can be considered as living example of empowered women.

What is uterus Fibroid, Symptoms, Causes, and treatment?
(2,119)