January 1st marks the start of the New Year according to the Gregorian Calendar. It also depicts the start of the new aspiration and dreams for your life. Every country has its own tradition and customs to welcome the day. In the United Kingdom, it is the bank holiday. Like everywhere else in the world, the New Year is a celebrated occasion in the UK. People in the UK start the celebration on December 31st. Usually, people celebrate the start of the year by hosting parties at home, bar, restaurant or at the street. Wishing friends and family members the New Year with beverages like sparkling drinks or champagne when the clock strikes midnight is another tradition followed in the country. But, the celebrations in different parts of the country is different. Want to know more? Read ahead!

The highlight of the celebrations in London is the public firework displays as well as the parade. The famous public firework in London attracts thousands of people at the banks of river Thames. The fireworks of twelve minutes duration is a ticketed event, which happened at the strike of twelve by the Big Ben. You can watch the display of pyrotechnics over the London Eye accompanied by music.

Northumberland, England has a traditional fire festival. The Allendale festival begins in the New Year when men carry a fire procession. The men carry the lit tar barrels across the village. The procession completes when the lit barrels are thrown into the bonfire. The village square becomes the main attraction during the procession. 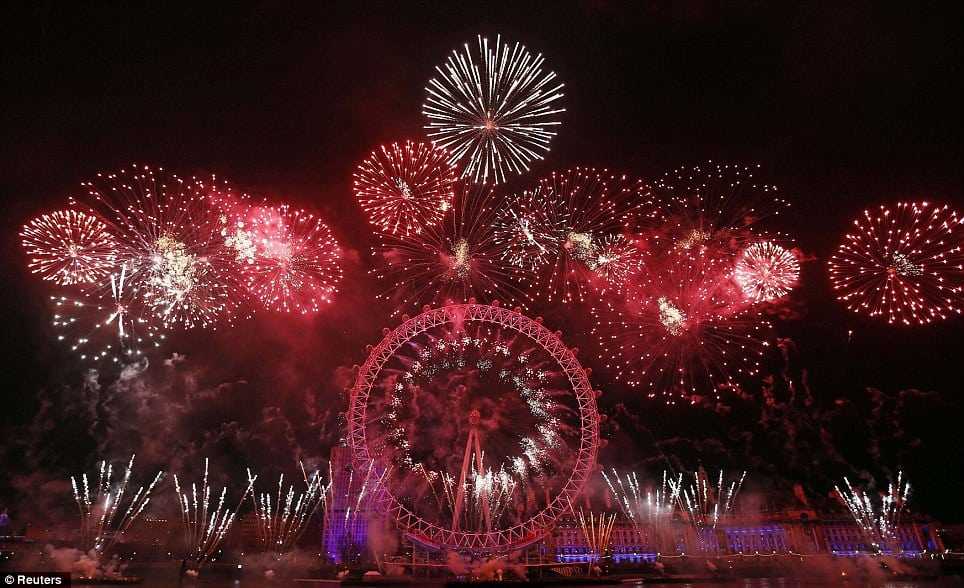 The unique Scottish custom of Hogmanay (meaning last day of the year) is the celebration that starts on December 30th. During the event, torchlight processions take place. One such famous processions are the Edinburgh’s Parade. On the 1st of January, another interesting ceremony takes place. People in costumes jump into frozen water bodies. The event known as Loony Dook aims to raise money for charity. Scotland has another custom New Year custom known as First Footing, where guests bring gifts to their hosts. The gift like salt, coal, black buns, whiskey, and shortbread symbolizes good fortune.Another unique Scottish tradition is the Fireball Ceremony. It takes place in Stonehaven at midnight, where forty people walk down the High Street. People swing the flaming balls over their head while walking. The twenty minutes ceremony is usually followed by fireworks.

Wales welcomes the New Year by conducting the event 'Calenning'. It is the event of exchanging gifts between the children. It is a tradition that is only followed in some parts of Scotland. During the event, the children go door-to-door and sing songs. They carry corn and springs of evergreens with them. They exchange it for money or food.Everyone in the United Kingdom celebrates New Year as it is a secular holiday. Though it is not compulsory for the employers to give the employees leave, most business places remain closed on January 1st. everyone in the UK likes to spend time with their family and friends and have some fun with the parties.

What is uterus Fibroid, Symptoms, Causes, and treatment?
(1,423)