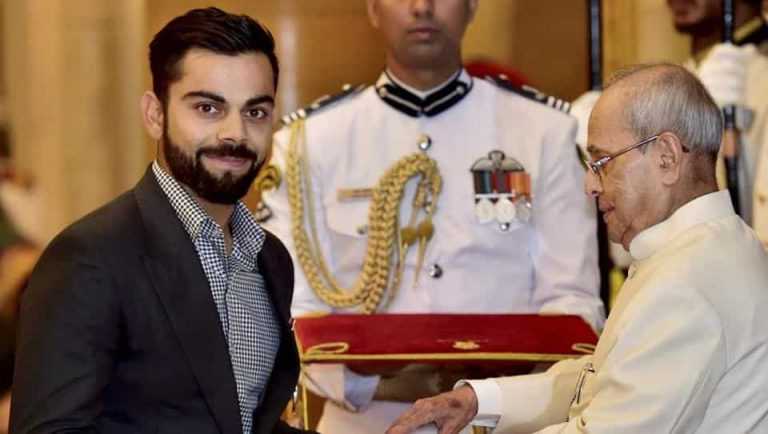 Virat Kohli, captain of Indian Cricket Team was awarded Padma Shri (the 4th highest civilian award) at Rashtrapati Bhavan on Thursday (30-March-2017). He received this honor from the president of India, Shri Pranab Mukherjee. Viral Kohli took to twitter and Instagram to share a warm and heartfelt message after receiving this honour. He was overwhelmed to get this award and he wrote,<strong> “What an absolute honour and a memorable day to receive the Padma Shri award from the president of India. These days last a lifetime. God has been kind. Jai hind (sic)”</strong>. He also shared the video of the ceremony on social media sites.

Kohli has delivered some phenomenal performances in last year and led the Indian cricket team to success. He took the team to the top position in cricket test matches after he took over the team leading position from MS Dhoni. He was the player of the tournament at T20 Championship. He has always been in the top three positions in the ranking for batsmen across all the formats. Individually he has been performing well for many years. He is among the 8 sportspersons who were awarded Padma Shri this year.

He has got what he really deserves. He is really an inspiration for everyone and his message touches the heart and inspires a generation. He has done really a good job and his enthusiasm motivates lots of people.